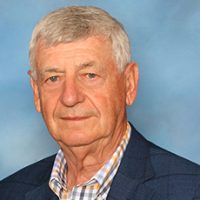 He served as a director of ATK (Alliant Techsystems, Inc.), an advanced weapon and space systems company, from 1997 to 2009, and Anteon International Corporation, an information technology and systems engineering solutions company, from 2005 to 2006. Mr. Smith was also a director until Jun 2014 of Ingram Micro Corporation, a technology sales, marketing and logistics company, FLIR Systems, Inc., which produces infrared cameras, thermal imaging software and temperature measurement devices, Mr. Smith is also the former chairman of the Aerospace Industries Association, an industry trade organization, and is a charter member of the Electronic Industries Foundation Leadership Council.

He is currently a director, Chair of the Nominating and Governance Committee and Audit Committee member of Teledyne Technologies Incorporated, which provides enabling technologies for industrial growth markets and WABCO Holdings, Inc., which provides electronic and electromechanical products for the automotive industry.

Mr. Smith served as an Officer in the U.S. Army, including a combat tour in Vietnam. He is a Charter Member of the Electronic Industries Foundation Leadership Council. He was awarded an honorary doctor of laws degree from Pepperdine University, CA. Mr. Smith holds a B.S. Degree in Political Science from Providence College and an MBA from Babson College.
Go to Top
We use cookies on our website to give you the most relevant experience by remembering your preferences and repeat visits. By clicking “Accept All”, you consent to the use of ALL the cookies. However, you may visit "Cookie Settings" to provide a controlled consent.
Cookie SettingsAccept All
Manage consent